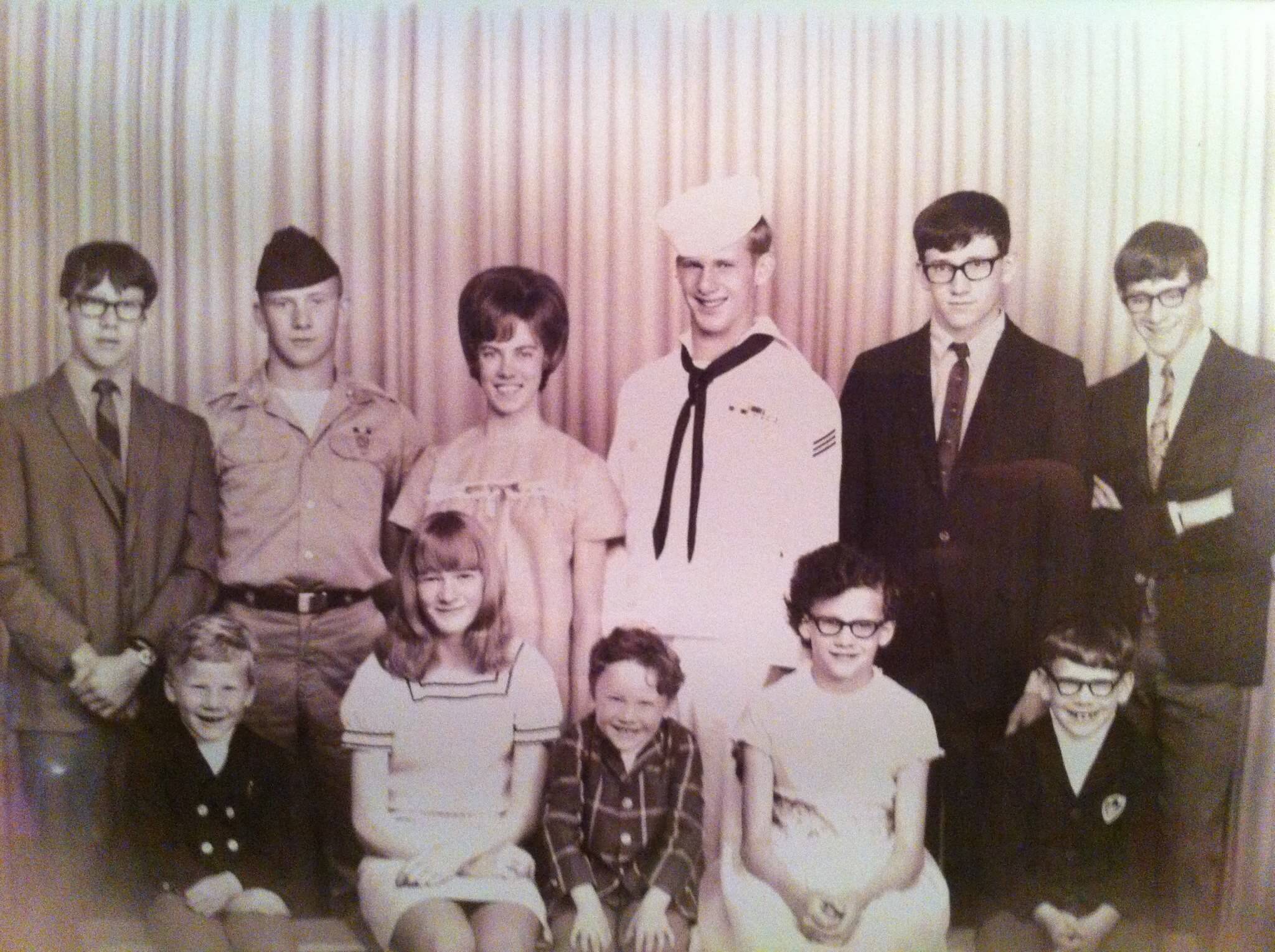 Comments Off on Wisdom and Love

Hi all.
Bye all.
Coats piled up on the entryway bannister.

There were so many of us kids! We ran upstairs and downstairs, girls ganging up on the boys to push them down the stairs. We were girls, so we didn’t get in trouble for hurting boys — at least not at Grandma and Grandpa’s house. On Sunday afternoons when it was warm, some of us went to the candy store on the corner.

Hi all.
Bye all.
Coats being taken.
Doors swinging shut.

Uncle Larry died in 1982. It was a week before Christmas. I was four. As far as I can remember, Grandma still made enough chili on Christmas Eve to feed an army, the dining room table was still filled with cookies, breads, and bars made by her and the aunts. On Christmas Day, I think my Grandpa still carved up a ham and mashed up potatoes.

The rhythm of gathering kept on.

At the bottom corner of the fridge in my Grandparents’ kitchen there was always a brown paper bag with full-sized candy bars. If for some reason a candy store trip wasn’t happening, I could usually get permission to have one of those. I remember eating Caramellos in an upstairs bedroom, while my cousin Tina ate Kit Kats in her precise way. She’d nibble the sides, then the ends and then each layer, taking her time.

Tina is one year, one month, and eleven days older than me. I know this, because she told me so many times it’s impossible to forget.

Hi all.
Bye all.
These days stopped decades ago.
Decades.

Yet, today they seem more out of reach to me than they ever have before. Grandma and Grandpa moved out of their red house with its big front porch, and windows trimmed in white about twenty years ago.

Back in 2007, Grandpa Lynch died. Then, cousin Tara. If I recollect right, they died within a week of one another. Time in my memory keeps shifting.

On May 30th, 2019, Tim Lynch died unexpectedly from an acute GI Bleed. He was 57. He was one of seven remaining brothers. Now there are six. Soon, there will be five. One is in hospice as I write this.

After a weekend of grieving, I am sitting in a coffee shop remembering Uncle Tim asking me how to start a conversation with a woman in a coffee shop. It was maybe five years ago. We were on the phone.

I fumbled through advice. Right now, I know what I should’ve said. “Whoever the woman is, she is so damn lucky to have you wanting to talk to her – so just talk.”

There were so many conversations and moments that I was fortunate enough to have with Tim. 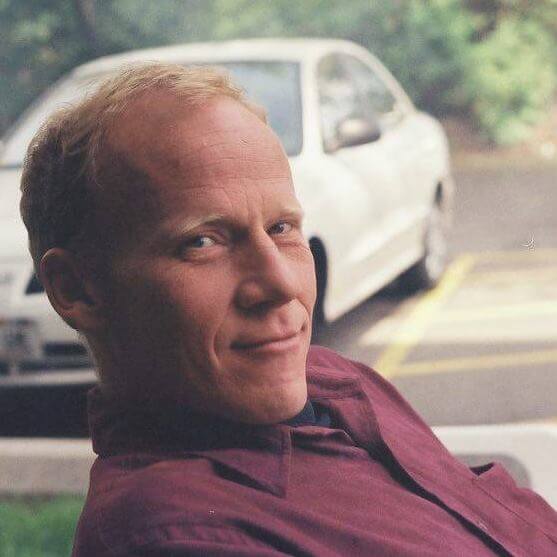 Here are just a few:

Tim bought me a drink. We were at my cousin Oliver’s wedding, standing at the bar, talking. A young man, one of Oliver’s friends, came up to me.

“I just wanted to let you know that you’re gorgeous,” the young man said.

“Thanks,” I said, smiling. He was about a decade younger than me.

“I was just telling her how-”

The young man explained that he had a date at the wedding and wasn’t trying to pick me up, or anything. Tim held firm. I waved goodbye and laughed with Tim.

I’ve told this story many times. It’s one of those moments in life that I felt so protected and loved in. I was 37, yet not too old for my uncle to keep men not worth my time away.

He’d insulted a man I thought I was falling for only a couple of months before. More than a year later, Tim stuck out his chest and kind of pushed into Chris. It was their first meeting. Chris was watching the Vikings game on Thanksgiving at my cousin Deanna’s.

“What was that about?”

“He was just messing with you,” I said and shrugged my shoulders. “Some of my uncles are protective.”

Perhaps there should be an intercom system that issued statements at family gatherings:
This is a test and only a test of the early d-bag detection system. If you are not a d-bag, you have nothing to worry about. If you are, best be on your way now. That man is going to make courting the lady you love as unpleasant as he can. Depending on your d-bag level, his brothers and nephews may join in. There are many of them. Again, this is a test.

Tim never said anything rude to, or about Chris. I took (and still take) that as approval.

To be fair, I have never witnessed Tim, or any of my uncles be mean to anyone for any length of time.

On a drive to a family function, I drove my new-to-me, red and white two-door Mini Cooper. On a stretch of straight highway, I took it up over 90.

“Have your mechanic check the oil pan,” he said. “Wait. Why are you driving 90? You shouldn’t be going that fast.”

This from the man who rode his motorcycle well over 100 mph. I still drive fast sometimes. I don’t think he ever slowed down either.

There were the growing pain talks that we had.

When I was in junior high and wearing too much makeup, he explained that I should wear less. “Boys like it when girls are more natural.”

He and Uncle Joe bought me tapes once. They’d gone shopping together. Uncle Tim said he his niece needed some cool music to listen to and that he’d lobbied for the soundtrack to Young Guns II. I still sing along too loud to Blaze of Glory while driving down the road.

Tim was at the airport when my parents brought me back from running away to New York City. “Grandpa said they should just leave you there, but I didn’t agree with that.”

After falling in love with the book, Zen and the Art of Motorcycle Maintenance, I wanted to ride a motorcycle in the worst way. All of my life I’ve had an aversion to loud noises. When I was in grade school, or younger, I saw my uncles in the hospital after accidents. I don’t remember a time when I didn’t know what road rash was.

I was at Grandma and Grandpa’s one summer afternoon and Tim was too. I asked him if I could go for a ride on his motorcycle. It wasn’t hard to convince him. He made me wear a helmet. Once we were on a road with a little curve, he leaned the bike to one side and the other, then said, “See you can lean it this way and that, and you won’t fall off.”

Tim drove us back safe and slow. From then on I knew, I liked the philosophy in the book, not motorcycles.

I took classes at the Guthrie Theater when I was eighteen. One Saturday, on my way to a Shakespeare class, I received a ticket for speeding and my car broke down twice in traffic jams. The car might not have worked well, but it had a cassette player. He found me and restarted it both times.

Too rattled the second time, I went to his house instead of trying to go home. While I waited for the man I’d been dating to get to Tim’s place from Rochester, Tim and I talked about life and love. There was such a breadth and depth of conversation a person could have with Tim. He had a way of leaning into where people were at. Well, unless there was some bullshit about them that he found untenable. That was my impression anyway.

Having given up on my car’s ability to get me to and from my classes in the Twin Cities, I decided to move in with a woman I knew in Uptown Minneapolis. Uncle Joe and Uncle Tim came over to see where I was living. Tim had a map of the Twin Cities with red lines on the roads I was never to be on at night.

He also didn’t want me to ever do laundry in the building’s laundry room alone. If I needed to wash my clothes and no friend could be with me while I loaded and unloaded the machines, I was to bring my clothes to his place and wash them. “Minneapolis is the rape capital of the country right now. It’s not safe.”

Tim instructed me to always have something to read and something to listen to with me when using public transportation. “If you’re on a bus, or waiting for a bus, put your headphones on.” The reading material and ability to at least look like I wasn’t listening was to prevent me from conversing with people I shouldn’t.

“I never knew you had such a beautiful voice. You should quit smoking and join the choir. A lot of famous singers got their starts in church choirs,” he said while we smoked cigarettes outside with my first serious boyfriend. I was nineteen. It was Christmas Day. The night before, we’d sat next to each other at Mass. Back then, I felt conflict toward religion and couldn’t see singing in a church choir. Years later, I did sing in the choir at St. Francis of Assisi Church, the one we were in Mass together at.

Like Grandma, Tim delighted in mischief. I remember him in Grandpa’s rocking chair saying, “I’m wearing my holy jeans for Sunday.” Many days were holy to him, at least back then.

My daughter, Elizabeth, told me a story about talking with Tim at a family picnic a few years back. She wanted him to pinky swear with him about something. Then she said, “Wait. Pinkies don’t swear, but middle fingers do.” Elizabeth said he laughed so hard. Then, from that day forward whenever they saw each other, they raised their middle fingers in greeting.

Tim made me cry once. My tears, or causing them were not on his mind. I don’t think I was alone in having a few fall that day. It was at a family picnic.

Grandma had been living on her own in a senior living apartment for some time (re:years) before the picnic. Tim had refinished the family dining table. He set it up before she arrived and rolled out a red carpet from the dining table down the driveway, taking care to set every part just so. Then, he walked her down the carpet to the table. As they walked, I couldn’t help tearing up. As I write this, my eyes are welling. It’s still one of the most endearing moments I’ve ever witnessed.

I feel like I’m sitting across from regret at the conversations Tim and I didn’t have time for. Even at 41, I feel like time will stretch on forever. I know better. As life moves on, I’ll try to act on knowing better.

Tim had more nieces and nephews, great nieces and great nephews than anyone has managed to keep track of. Grandma used to keep all our names and birthdays written down in a book. I don’t think she does anymore.

Who could keep track of all of us?

The point is, I know I’m not alone in having cherished conversations and memories with Tim to hold onto. My mind is trying to sort through the wisdom given and love shown to me by him. Though, in my imagination I can see him giving a wry smile and raised brow at the word wisdom.

The Making of Morning Rituals