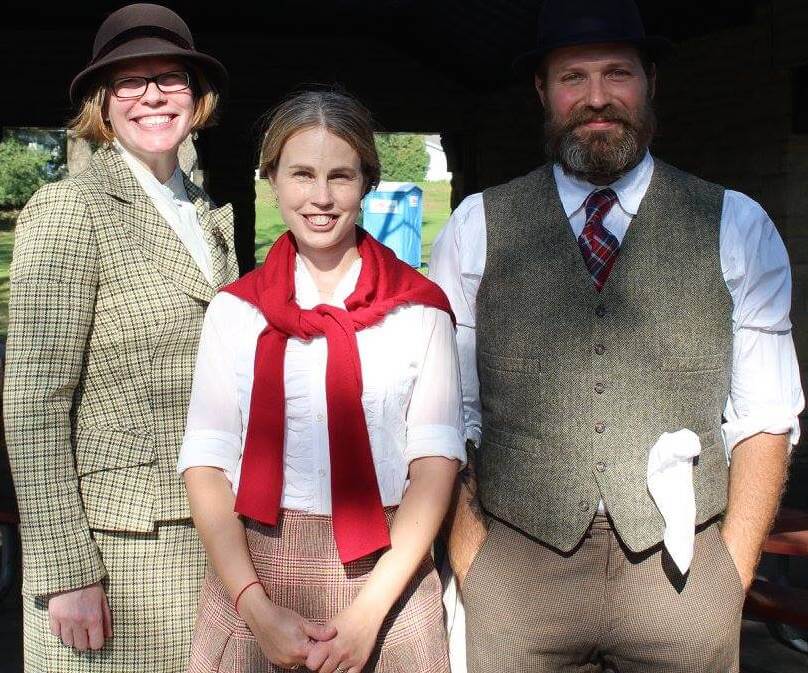 Comments Off on Tweed Riding Fashion Fun…or, One More Reason to Look Forward to Fall

Lollygaggers are welcome on the Tweed Ride. Really, all are welcome. This particular bicycle ride isn’t competitive. “It’s more like if you want to ride and have a tea and biscuit,” said Katherine Stecher, one of the organizers behind Rochester’s Tweed Ride. “The ride won’t be strenuous, because then you can’t tweed.”

In addition to tweeding, the Rochester Public Library book bike will be there. The Friends of the Library donated banned books to give to riders and there will be some talking about intellectual freedom. “We tie it to the Banned Books Week, because it falls on the same week,” said Stecher. She and Keri Ostby are with the Rochester Public Library, one of the event’s sponsors. I talked with them both recently about the upcoming Tweed Ride and it was so much fun.

Why tweed on a bike ride?

Nostalgia. Or as one of my friend’s would say, “for funsies.” In 2009, the first Tweed Run (bicycle ride, really) was held in London. Now people are going on Tweed and other themed bicycle rides around the world.

Tweed is considered traditional British cycling attire. When the safety bike became available, tweed was in fashion and worn when participating in sports like hunting, golfing, and cycling.

For women, tweed and cycling may be even more symbolic. According to Young and Martin, authors of Tartan + Tweed, “Cycling became a craze for women in the 1890s, as they could independently travel the streets without the need for a carriage, a horse or a male companion…The cycling woman of the 1890s…chose tweed instead of silks and lace.”

Words you get to say when talking tweed ride fashion: plus fours (a baggy knicker), jodpurs, circle skirt, and duffle cape.

“If you start to get into bike fashion stuff, there’s nothing that says you have to wear spandex,” said Tweed Ride organizer, Keri Ostby.  “You can totally go down a rabbit hole looking at tweed and bike fashion.” Ostby has a Pinterest board dedicated to tweed. You can check it out here.

“I don’t like to bike in jeans, it’s sweaty,” said Ostby. “I like biking in skirts.” She recommends using skirt weights or skirt garters for maintaining modesty while riding pants-free. She also recommended checking out the Biking in a Dress post on the Rochester Moms blog. Both Stecher and Ostby recommend finding a skirt that is big enough to pedal in and short enough not to get caught in the bike chain.

“I wore high heels [for the Tweed Ride] and it was fun,” said Stecher.

I’m on it. A bike ride where it is socially acceptable for me to rock some heels, a cute skirt, and wear a tweed duffle cape is the sort I need to be on. When else am I going to have a good reason to shop for a duffle cape? And heels…when my feet are confined to practical flats they chant, “There’s no place like heels.”

“I’m not a hipster. I still love it. All ages. All abilities. It’s a five mile trip with a break in the middle for snacks,” said Stecher. “Fashion-wise do what you want. Come with some clothes on.”

Ostby and Stecher also encourage wearing a helmet and there are some cute helmets out there. Check out Bike Pretty for some ideas. One of my favorites is a Tweed Helmet.

Katherine purchased a  tweed capri suit online for about $5 for last year’s Tweed Ride. If you live in the Rochester area, you could shop at Kismet, Goodwill, Refashion, Savers, Clothes Mentor, or Salvation Army for an affordable frock to wear for a day. “Raid a closest or two,” said Stecher. “I do like the idea of raiding your folk’s closet.”

If you’re handy with a needle some vintage patterns for modern sewers have been released by Butterick, Simplicity, and Vogue.

Accessorizing for the Tweed Ride

Talking accessories brought out a flurry of words from Ostby and Stecher. They’d suggest: lapel pins, brooches, tweed ties for men, tie tacs so your tie doesn’t flap in the wind as you’re riding. Big chunky jewelry, a cravat, pocket handkerchief for men. Fascinators that you can take off so you can put your helmet on. Suspenders. Beards, if you happen to have one. Felt hats if you don’t find a tweed one. Bowties.

“Every year we have some vintage nice bikes, some people bring a penny farthing, the bike of choice is an Electra. It’s a step through, cruiser bike,” said Ostby.

“It’s almost like a bike show” said Stecher. “Just like you get your vintage car out once a year to show everyone.”

“It was like my Classic Car that I kept in the garage,” said Ostby of her own bike. “Then I thought life’s too short. It’s pretty and I want to ride it.”

If you don’t have a bike, you can rent one from Nice Ride.